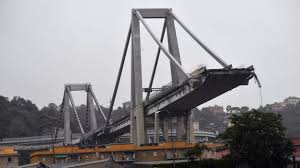 It is not yet clear what caused the collapse of the Morandi bridge in the Italian city of Genoa, but several explanations have been mooted.

But the bridge may have also suffered from the marked drop in investment in the country’s infrastructure, which lags behind other economies in western Europe.

Plain and simple, austerity is what caused the collapse of the bridge, look at the drop in infrastructure/roads investment in Italy in the chart below:

Source: Genoa bridge collapse: What might be responsible? – BBC News